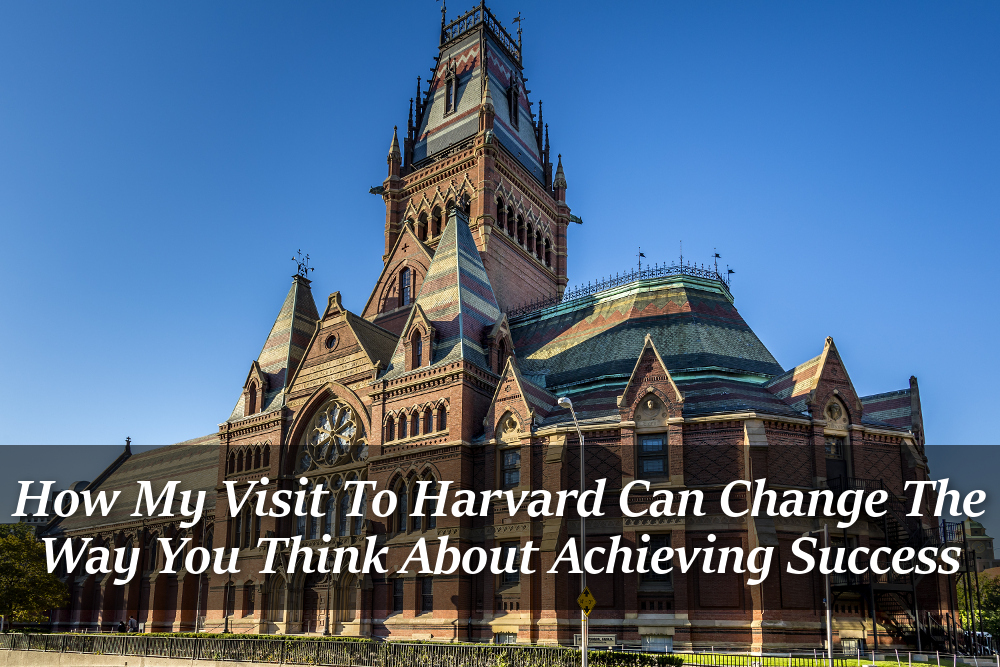 This article is inspired by the time I spent at Harvard and my desire to share the mindsets around ThinkRich and ThinkPoor.

Harvard University, founded in 1636, is located in Cambridge Massachusetts, and is the nation’s oldest and one of the most prestigious universities. United States Presidents that graduated from Harvard include John Adams, John Quincy Adams, Theodore Roosevelt, Franklin Roosevelt, John F. Kennedy, George W. Bush, Rutherford Hayes, and Barack Obama. Harvard’s endowment fund (donations of money and/or property) is over $37 billion.

ThinkRich, ThinkPoor is engraved in the society of Harvard and it’s a concept that you can master and use throughout all aspects of your life.

Harvard requires all incoming freshman to stay on campus in a designated area, close to each other. The foundation of Harvard’s lasting pristine reputation is built on connections and networking. In order to further ingrain the new connections and networking goal, Harvard has designated freshman only eating and common areas — it is a very well run bonding experience. Freshman roommate assignments are random; you can sign up with 7 of your friends and hope to get put into one of the same building across the freshman living area.

ThinkRich and network throughout your life, even if you do not currently have many connections, there is no better time to start connecting than now! Websites such as LinkedIn and Facebook can help you build quite a robust network with relative ease. Being successful is all about relationships, join clubs and organizations that attract other high achievers. Be careful who you choose to spend your time with. However, don’t just look to see what you can get out of others, think first of the value you can provide, if you are around the right group of people, success will follow.

Harvard understands that as people move through life together those with a stronger network seem to come out ahead. Those that do not pursue the support of a network and feel that “going it alone” is the way to proceed could be missing out on some of the best opportunities.

Harvard encourages students to explore classes outside of their concentration; in fact, of the 32 credits needed to graduate Harvard College, only 12 credits are required to be from the concentration subject matter. This freedom allows students to explore other areas of learning to find what they enjoy. For example, I know someone who is a pursuing a degree in Romance Language (at Harvard College) and is taking a math class to expand her field of knowledge, in this math class they make chocolate and use that to help solve mathematic equations — thinking rich means having the courage to exploring new ideas and think outside the box!

A ThinkRich mindset explore different options, and keep a sharp eye out for opportunities.

Many people start off with the idea of doing what they love, and then through college or trade school learning they gravitate toward what they are good at and even simply what will make them the most money. There is nothing wrong with doing what you are good at or even pursuing money in general, but if you are earning money doing something that you hate, that’s not what you were born to do.

Harvard inspires to build a community on campus where everyone helps and challenges each other to grow. It is great that Harvard offers opportunities to connect with fellow classmates, but the key is that people go out of their way to help each other and that solidifies the bond. The world is full of people who simply want see what they can get from others. Be different. Helping other solve problems should be one of your main focuses – help people just for the sake of helping. ThinkRich by understanding that often what you put into this world, you will ultimately get out of it.

Those with a ThinkPoor mindset tend to help others only when there is something to be gained from the situation. This limits the potential of building a community and will do less to better the world.

Birds of a Feather

Networking and Helping others are cornerstones of the Harvard community and education system; in addition it is very useful to understand the concept of “Birds of a Feather Flock Together.” In other words, you are an average of the 5 closest friends you have (professionally and personally.) Understanding that who you associate with will ultimately impact your financial success is very important. This does not mean to stop hanging out the people who you want; it does mean to better understand where your advice and financial information comes from. ThinkRich and read book or blogs from knowledge people, set out to get advice from people who are already successful in your area of interest. Offer to buy them lunch, connect via a message on Linkedin and try to offer your opinion on a recent book or article they’ve written.

“You can’t soar with the Eagles, if you’re lying with the Cattle.” – ThinkRichThinkPoor.com

Attending Harvard is a dream for most people – the college represents opportunity, wisdom, comradery, and esteem. ThinkRich and work to make your dreams and goals a reality — admission to Harvard College is very selective (under 5% of applicants get acceptance letters) and quite expense, around $43,000 for tuition and $63,000 for tuition, room and board, and fees. ThinkRich and have the guts to purse dreams and goals; did you know that around 70% of Harvard College students get some form of financial aid? How about that almost 20% attend Harvard College free! (that’s tuition, room, board, food, and fees all free)

You will never know the true extent of the possibilities available to you unless you go after your dreams and goals and see where the journey takes you. Along your path be sure to keep your eyes open for opportunities even if they may vary from your initial goals and dreams, life can take you to some unexpected places.

I will leave you with this, the John Harvey statue in Harvard Yard on campus is one of the most photographed landmarks in the nation; but it is the statue of lies.

Things are not always as they appear. You are likely smarter than you think, more capable than you believe, and have access to more opportunity than you realize.