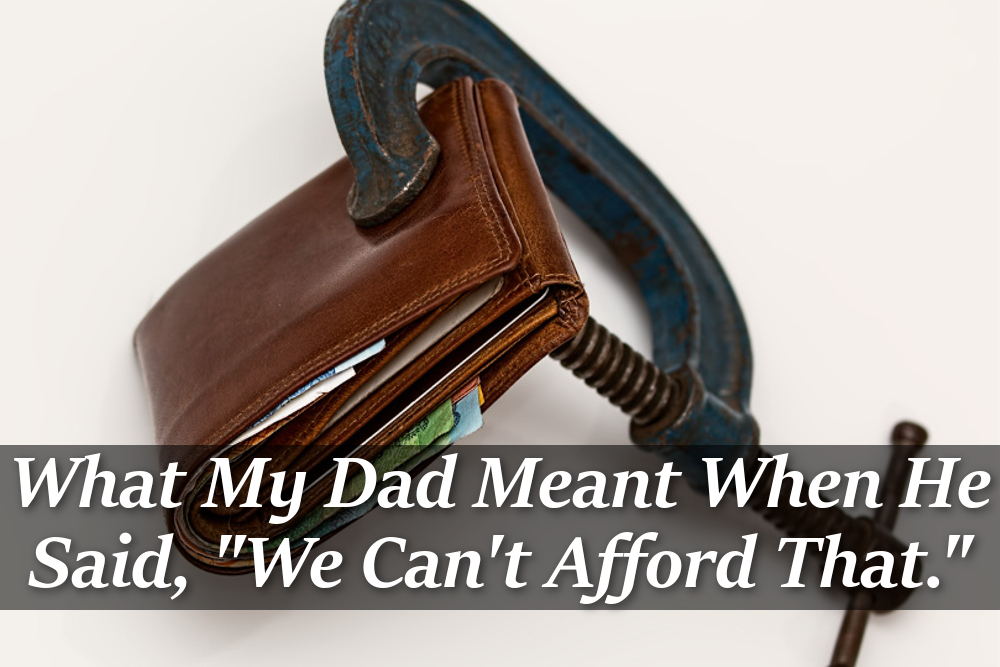 I grew up in an upper middle class home. My dad owned a small home building company. The nature of real estate meant that there were good times and bad, but there was a phrase that I would hear even during the good times that I didn’t fully understand until I was on my own and handling my own finances, “We can’t afford that”.

As a kid, it was easier to understand when I knew business was slow, but he would still say it with all sincerity even during good times. I used to think, “How is that possible? Are we out of money?”

I discovered it meant the same thing during both good times and bad.

What Does it Mean to “Afford” Something?

To a ThinkRich mindset, “afford” means that it fits within a healthy budget. It means the budget sets aside a minimum amount each month that goes toward retirement goals and meeting monthly obligations like housing, food, transportation, etc. and if there is enough left over, there will be money for other things like entertainment, travel, and other luxuries. The word “afford” to a ThinkRich mindset considers not just present circumstances, but also future goals and desires.

Most Americans Live Paycheck to Paycheck

A recent report by CareerBuilder revealed some troubling data regarding budgeting and debt for Americans:

Another way to say this, most Americans can’t actually afford their lifestyle. Look around you or on social media, Americans are obsessed with spending, whether it be new cars, expensive vacations, the latest smart phones, remodeled homes, or an expensive home – Americans are addicted to spending, and the debt that goes along with it.

Another study early last year showed 44% of Americans would have to borrow money or sell something to cover a $400 emergency.

While many Americans give the impression they are doing well financially, all it not as it seems. It is a fool’s errand to try to keep up with the Joneses, largely because they are probably up to their eyeballs in debt.

I Learned What “Afford” Means the Hard Way

I’ve lived beyond my means and it was awful. In my early/mid 20’s I pushed the limit with my finances. I bought a new car with a purchase price that was over 50% of my gross income. I put a good amount down, but I should have kept my old car and kept that savings in the bank. I built a home and took on a mortgage that was over 4 times my income. The only thing I did right was avoid credit card debt. Apart from that, I lived paycheck to paycheck.

I had a ThinkPoor mindset. I thought afford meant what I had the money for at that moment. I thought in terms of the monthly payment on things like cars and houses. I have to admit, living that way did give me fleeting moments of happiness, but sustainable happiness was elusive as I continually chased the next dose of temporary happiness created by each purchase. In reality, I was miserable, but to others, I looked like I was far more successful than I appeared.

The most embarrassing part is I had a finance degree, so I “knew” about finance, including personal finance. I knew better. I just thought I could tame the bull by essentially “growing into” that lifestyle as my earnings increased, but living beyond your means is always a risky scenario, and that risk cost me.

I didn’t see the financial disaster that was looming. When the economy crashed in 2008 I lost everything. I didn’t have savings to weather the storm, or at the very least, enough savings to give me more options. I was in total desperation, but it didn’t have to be that way.

In the end, I survived and learned a lot, but I would be a lot further ahead if I were more responsible with my finances and learned to Think Rich earlier in life.

ThinkRich = Living Below Your Means

From that experience I learned to think differently about money and budgeting. I finally learned what my dad meant when he said, “We can’t afford that”. My wife and I have developed a lifestyle that keeps our fixed costs low compared to our income. We shop at budget stores like Ross and TJ Max for everyday clothes, and find sales for everything else, live in a home that is only 2 times our household income, drive older cars and no longer buy new. Our budget is meticulously planned and prioritizes savings first, then allows for other necessary expenses, and a little left over for luxuries. If it doesn’t fit into our budget, we can’t “afford” it even though we have plenty of savings. Those savings aren’t for today, they are for our future. They are for peace of mind.

When others look at us, including the cars we drive, the house we have, or clothes we wear, they won’t see someone who has “made it”, but we don’t live this way for others. We do it to make necessary plans for our financial future. We do it because it allows us to enjoy life more. Instead of being burdened by a mountain of debt and all of the expenses that go along with it, we have a lot more flexibility and financial freedom. We sleep better. Stress is a lot lower. Life is better.

Living below your means includes sacrifice, but it’s a relative sacrifice in the scheme of things. We don’t “need” expensive houses and cars. In the end, those things won’t make us happy. Learning to live within our means has done far more to enhance our overall well being than we otherwise could have imagined.

Learning the ThinkRich approach of what it means to “afford” something is an essential step toward a better financial foundation and more fulfilling life.