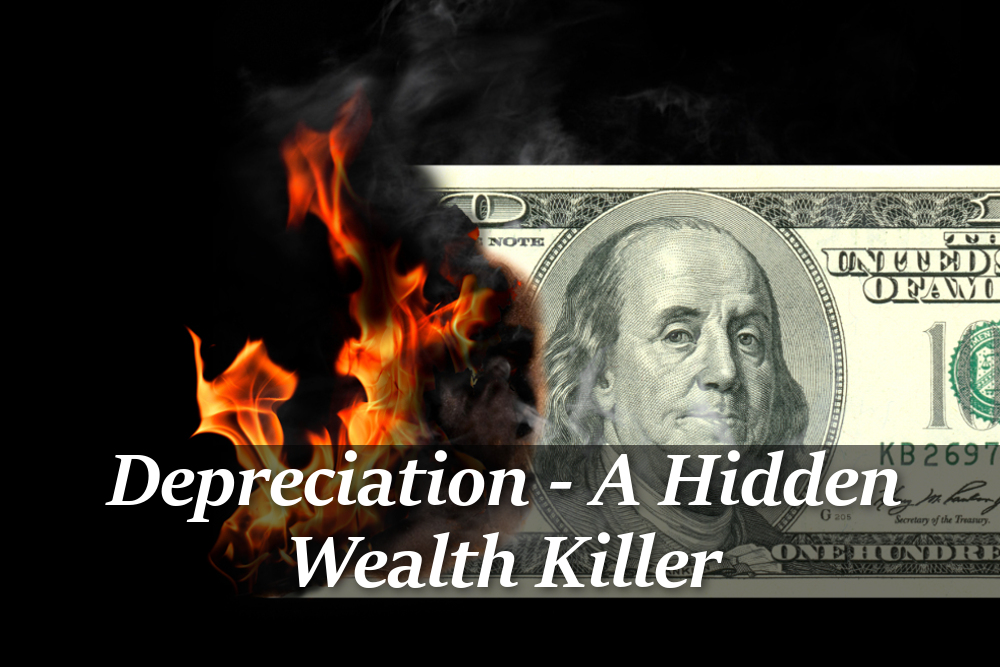 Depreciation is a concept nearly everyone is aware of, but very few consider it when thinking in real terms of costs. If you keep track of your net worth, including value of assets like cars, boats, and the like, you may notice your net worth isn’t increasing as fast as you might expect given your savings rate, or it may even be declining. The culprit is most likely the silent wealth destroyer known as depreciation.

In simple terms, depreciation is the loss of value over time. This loss in value can be caused by a few things, but it is primarily due to wear and tear (reduction of useful life), and changes in consumer preferences (things can go out of style).

Almost everything. Even houses “depreciate”, but their reduction in useful life, and changes in consumer preferences (style) are usually offset by the increases in price that occur because of inflation. It is the reason new or recently renovated homes are worth more than outdated homes. However, nearly everything you buy depreciates – cars, electronics, clothes, and food. Ok…food doesn’t depreciate in the traditional sense, but it does reduce in value due to usage and time. I included it to use as an unconventional example.

Depreciation of a Pineapple

The wealth of a pineapple can be consumed in two primary ways:

I know, this is obvious, but bear with me. The simplicity is on purpose.

The consumption of wealth by eating (consuming) the pineapple is obvious, but it’s important to recognize value can be consumed even if you receive no utility from it. It can simply “spoil”.

In very basic terms, there is little difference between a pineapple and a TV or car. As you use things, they reduce in value. If you just let them sit, they can still lose value. The rate of depreciation differs from one item to the next and this is important to keep in mind when it comes to purchasing decisions.

The most important thing to understand is that deprecation is a very real expense.

Depreciation makes you poorer, and it does it right under your nose, often without you even noticing. Big ticket items like cars offer the most notable example of how this happens and it happens instantly. When you first drive a car off the lot it loses roughly 11% of its value. After 1 year a car can lose as much as 25% of its value.

Everyone *knows* this is happening, but few realize how quickly it happens and to what extent.

You don’t need to specifically budget for deprecation for most purchases like clothes or food. That’s because when we spend money on these items we typically assume the full price of the item is the expense. In other words, we don’t account for any salvage value the item may have when we look to replace it or are no longer in want of it. So when we buy a T-shirt, we assume the $10 (I hope you don’t spend more than $10 on a T-shirt) is the full expense. However, with purchases like cars, boats, and other large purchases, these don’t typically hit our household budgets the way the smaller purchases do.

When we buy a $20,000 car, we don’t just budget an expense of $20,000, but we don’t necessarily assume resale value either. Since most finance their car, it falls into a budget item labeled ‘car payment’. Even if we pay cash, most save up for the car, but then just spend that money from that “account” or portion of their savings earmarked for the car.

It is a major mistake to ignore depreciation, no matter if you are financing these purchases or paying cash. Accounting for depreciation of these assets should be a part of your purchasing decision.

Depreciation is a primary reason why you should be conservative with how much you spend on these kinds of assets.

Obviously, the more you spend on depreciable assets, the more you will lose to depreciation. Many (against our recommendation) spend as much as 50% or more of their income on a new car purchase. Meaning, if someone makes $60,000, they will spend $30,000 or more on a new car.

Under this scenario, if someone manages to save 10% of their income in a given year, they will put $6,000 toward savings. However, they will lose $7,500 in the first year due to depreciation of that new car. All things being equal, their net worth would actually decline during that 1st year by $1,500 (savings minus depreciation). That is certainly less than ideal if your goal is to grow your wealth.

Naturally, spending less on depreciable assets will reduce your losses from depreciation.

A depreciation curve represents the loss in value over time. When plotted on a graph it usually looks like a curve because depreciation rates tend to drop over time, slowing deprecation losses. If the rate of depreciation were constant from beginning to end the ‘curve’ would be a straight line going down from left to right.

Most big ticket purchases have what is called a steep depreciation curve, which means the item will take a large loss in value in the first year or so, with the rate of depreciation slowing over time.

For example, 20 year depreciation curve for a car tends to look something like this:

Routinely buying new things that have steep depreciation curves like cars, boats, electronics, etc. is a recipe for financial disaster. This isn’t an argument against EVER buying something new, but it is something that should make you careful consider these purchases, including better alternatives.

How to Avoid (or at Least Reduce) Depreciation Losses

There are 3 primary ways to avoid, and or reduce your losses due to depreciation.

Depreciation is a common enemy of building wealth. It is very easy to overlook, but it can wreak havoc on your goals of financial independence.